Nightmare Alley first appeared in 1946 as an eerie novel by William Lindsay Gresham. It then was adapted as a 1947 film noir motion picture starring Tyrone Power and directed by Edmund Goulding. A graphic novel adaptation was produced in 2003 by underground cartoonist Spain Rodriguez. Then in 2010, it was adapted into a musical by Jonathan Brielle.

Now a new version of this creepy tale has been released. It is directed by Guillermo del Toro (The Shape of Water) with a screenplay co-written by del Toro and Kim Morgan. Bradley Cooper stars as Stan, a drifter trying to escape something in his past (seen in flashbacks) in the economically tough times of the late 1930s. He is hired by Clem (Willem Dafoe), the owner of a rowdy traveling carnival replete with barkers, freaks, and bell-jar monsters.

At first Stan is content enough to work as a handy man but after meeting and enjoying sex with Zeena (Toni Collette), a fortune teller, he decides to try this trade. He learns the tricks of their mind-reading act from Pete (David Strathairn), Zeena’s husband. When Stan falls in love with Molly (Rooney Mara), another carnival performer, he convinces her to join him on the road performing as a team. A natural wheeler-dealer, he develops their mentalist act using Pete’s sophisticated system of word codes.

Soon Stan is convincing audiences that he has special spiritual gifts and can even communicate with the dead. Everything seems rosy until Stan falls under the influence of Dr. Lilith Ritter (Cate Blanchett), a Buffalo psychotherapist who becomes his co-conspirator, feeding him facts about her patients he can use in his readings. But her formidable sexual and mental powers are too much for him to comprehend or handle. 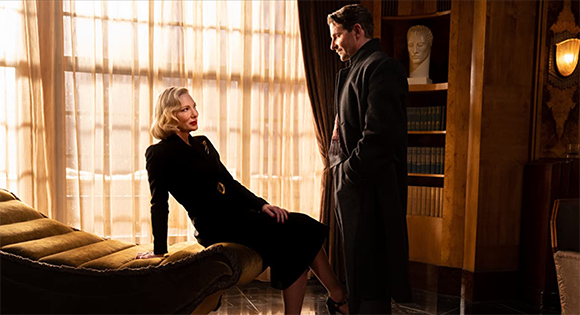 Guillermo del Toro, a master at creating atmospheric films, proves himself to also be a skillful explorer of the dark side of human nature which finds plenty of reflections in the carnival with its hustlers and malevolent grifters. A particularly despicable act involves a “geek,” an alcoholic kept drugged in a cage and presented to audiences as a man-beast who will eat a live chicken. The carnival preys on weaknesses, and audiences flock to see others who are worse off than they are.

Nightmare Alley is an invitation for its audiences to engage in the spiritual practice of shadow — to recognize and acknowledge those parts in others that we deny exist as well in ourselves: qualities such as unbridled ambition, greed, disrespect of others, selfishness, and ultimately violence. Philosopher Sam Keen in Hymns to an Unknown God likened this process to living in a haunted house. Nightmare Alley explores some of the most pernicious rooms of that mansion.

3 Poems About Feeling Emotions in the Moment, Including ”By the Way”

My latest book: "A Year of Buddha's Wisdom"

There Is No Evil | Film Review

Sharing the Wisdom: What I Learned from My Grandfather About Courage and Nature

Sharing the Wisdom: What I Learned from a Friend About the Gift of Presence